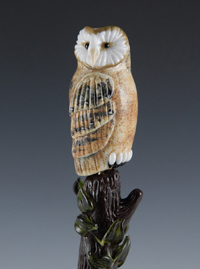 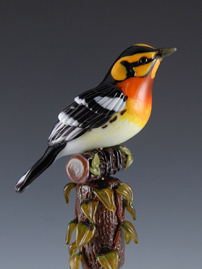 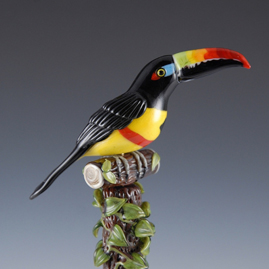 This workshop is designed to strengthen your skills as a beadmaker and assist you in achieving your own unique sculptural floral designs. We will make a variety of single and multi-petal flowers, leaves and seed pods. Techniques will include assembling canes, color mixing and overlays, and creating complex components and controlled application of stringers and dots. This class is intermediate level. 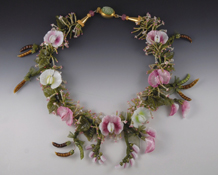 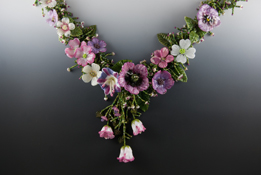 Kim Fields graduated from Michigan State University with a Bachelor of Arts degree in Advertising. She went on to build a career in television production, winning three Emmy Awards while at Chicago’s superstation -WGN-TV. Throughout her career, Kim continued to explore numerous outlets for expressing her passion for the arts.

On a whim, in 1999, Kim took a beginner’s lampworking class. Just a year later she found that working with glass was so fulfilling, she decided to leave her 20 year corporate career behind and devote herself completely to the art of glass beadmaking and jewelry design.

Among her achievements are the 2005 Glasscraft Emerging Artist Award from the Flow Magazine; 2008 Commemorative Bead Artist at the Bead and Button Show; the 2009 Hans Gobo Frabel Novice Award; the International Society of Glass Beadmakers ‘Presidents Award’; and was most recently on the cover of “The Flow” magazine’s Winter 2011 Women in Glass issue

Kim has taught at many of the most prestigious glass studios throughout the U.S. as well as in Europe and Japan. Her recent work can be seen on her website www.northfiredesigns.com and at shows, galleries, and in numerous publications.